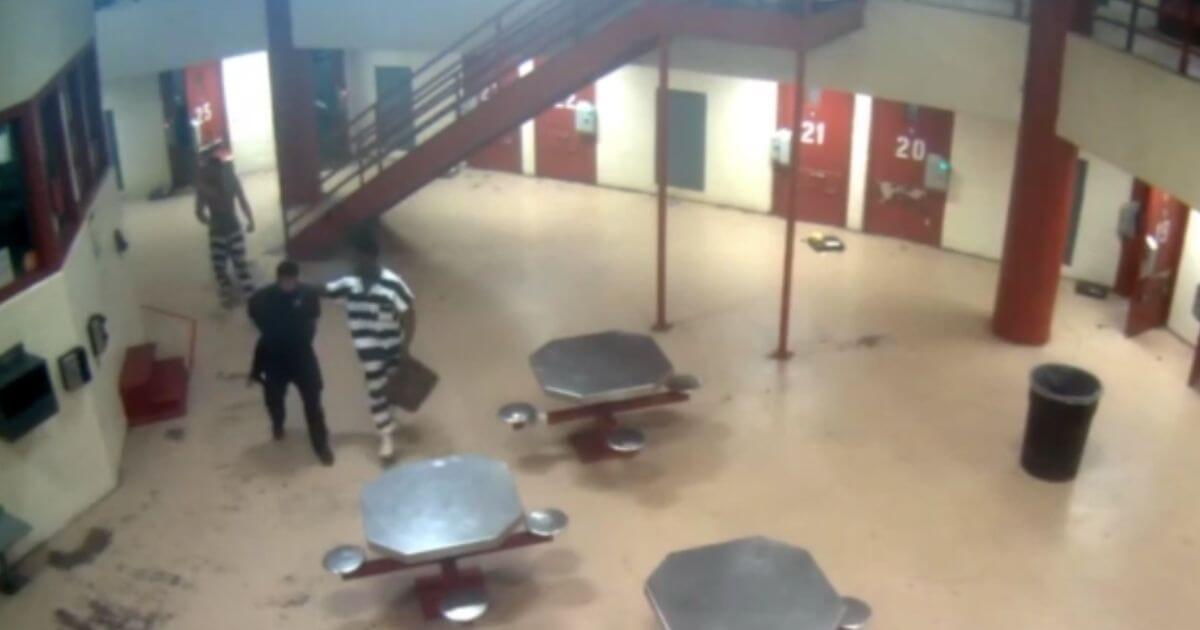 Police are being called “gangsters” after an incident in the Oklahoma County jail in which an inmate holding a knife to a corrections officer’s throat was shot dead by police.

The video contained graphic content of the moment inmate Curtis Montrell Williams, 34, confronted police. In the video, he stood at the top of a staircase and held an object to the neck of the corrections officer Daniel Misquez.

After a brief confrontation, during which someone said, “he’s got a knife,” two gunshots were heard. Williams fell to the landing where he was standing and Misquez tumbled down a flight of stairs.

“We’re fed up with an incompetent excuse for a police chief who refuses to do the right thing and guide procedures and mannerism of his officers,” he said, according to KOKH-TV.

In a direct rebuke to Gourley, he added, “You have turned your head and allowed your officers to be violent, disruptive, and even murderous. You are nothing but a group of gangsters.”

Gourley on Friday said the incident began around 4 p.m. on March 27, when citizens alerted authorities that a Facebook live video from the 10th floor of the jail seemed to indicate inmates had gained control of the facility, according to The Oklahoman.

Williams was at the facility awaiting trial. Police said they believe he was part of the beginning of the incident, when Misquez was taken hostage. For about an hour, inmates roamed the pod.

During that time, Misquez, whose hands were handcuffed behind him, was stabbed several times in the leg, hit on the head and sprayed with his own pepper spray.

Deputies and Oklahoma City police entered the jail pod around 5 p.m. At that time, most inmates went back to their cells.

Williams confronted police, with Misquez on his knees in front of him.

“The officers have to go in, they have to try and rescue this hostage because of the situation. We can’t sit there and watch him be brutalized anymore and possibly killed,” Gourley said.

“What’s very concerning to me as I watch this is, is he puts the hostage on his knees in front of me, and continues to hold that knife at his throat and that’s what the officers are faced with when they come in,” he added.

“And to me, that’s a very dangerous situation. I don’t know why you would put somebody on their knees like that unless you’re preparing to continue that assault further.”

“I knew Curtis for 34 years and I know for sure that he would not just go out and kidnap anyone,” she said to The Oklahoman. “Conditions in the jailed caused my son and so many other like him to lose self-control.”

“He shouldn’t have lost his life behind these conditions up in here and the stress he was under,” Williams’s stepfather, Donald Lambert, said.

Williams “would have me and his mom call up the jail and ask them when they’re going to feed them and when they going to pass commissary out,” said Alyssa Wesley the mother of Williams’ children. “He would tell me there’s mold in the shower, there are bed bugs and roaches. He hated it there.”

“I want justice, I really want justice and I’m going to get it,” said Rhonda Lambert, who along with Donald Lambert called for murder charges to be filed against the officers who shot Williams.

“We need to know (they’re) going to be prosecuted for what (they’ve) done,” Donald Lambert said.

Fauci NIH “Systematically Thwarted” Government Oversight of Dangerous Pathogen Research in Wuhan During Trump Admin, "This is a Systemic Problem"