‘It came and it took them’ 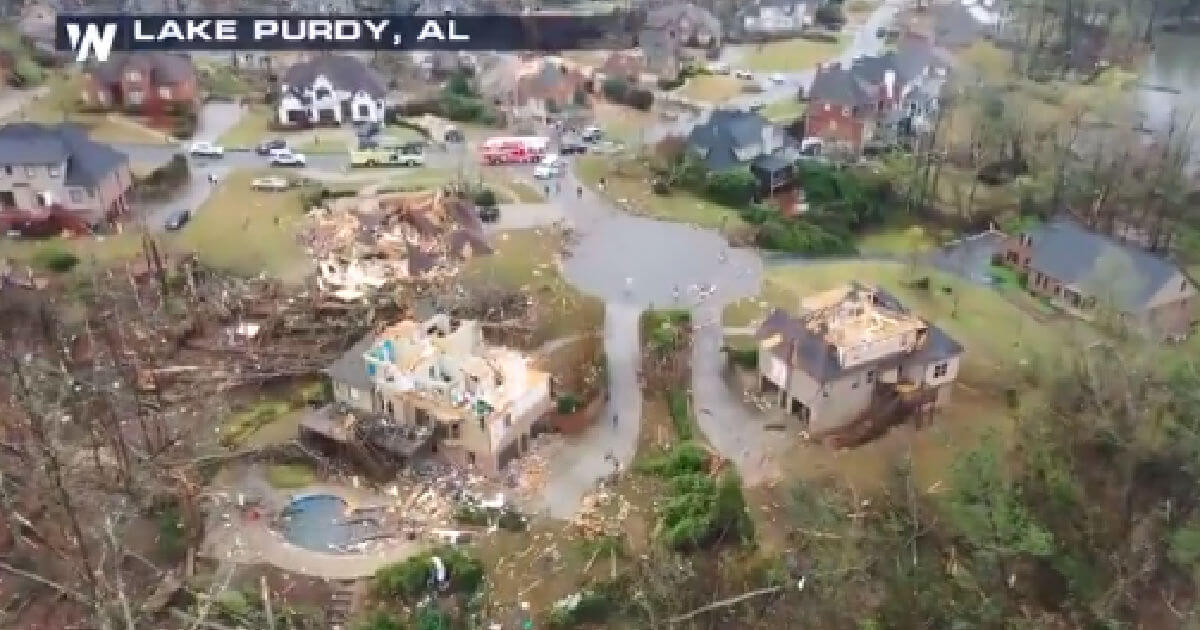 On Thursday, the perfect mix of atmospheric ingredients for the potential formation of tornado-forming, large supercell storms came together and took a heavy toll on Dixie Alley, with the dangerous storms spawning multiple twisters, some of which have been reported as possibly a mile wide.

Multiple fatalities occurred as a result, with survivors telling harrowing stories of barely escaping death and injury as the tornadoes ripped through small and mid-sized towns in its destructive path.

Here’s footage of one of the largest ones to touch down:

A day after violent tornadoes killed at least five people in Alabama and left residents sorting through the destruction on Friday, storm forecasters issued another “severe weather risk” warning for the U.S. South this weekend.

In the wake of reports of 24 tornadoes striking Alabama and Georgia on Thursday, rough weather on Saturday could stir more tornadoes in Alabama, Mississippi, Tennessee and the surrounding area, according to the National Weather Service.

Five people were killed in Alabama, NWS reported, although it could be days before the death count is finalized. Dozens of others were injured and entire neighborhoods destroyed.

A sixth death was tied to a tornado in Georgia.

In northern Alabama, the five confirmed fatalities were in Ohatchee, a town of about 1,200 people, according to the Calhoun County Emergency Management Agency.

Survivors described harrowing scenes of seeking cover from the twisters.

As she searched through a mountain of debris that a day earlier had been her father’s Alabama home, Rebecca Haynes Griffis recounted how her brother’s fast thinking helped both men survive the disaster.

“He saw it coming and he put my dad into a big bearhug and held onto him until things stopped moving,” Griffis told Reuters.

“The whole house started to contort around them. There was no roof all of a sudden. It came and it took them,” said Griffis, a COVID-19 travel nurse who was in Georgia when disaster struck in Ohatchee Thursday afternoon.

Her father, Mac Haynes, 78, and brother Philip Haynes, 50, landed in a cow pasture about 40 feet (12 meters) away from the foundation that once supported their trailer home, which was reduced to shreds.

Both men were hospitalized, with her father expected to be released on Friday. Her brother, who suffered fractures to his spine, ribs, shoulder and cheek, will remain hospitalized, said Griffis, as she sifted through the mountain of debris in search of family momentos.

“I found their wedding rings!” she said, clutching velvet boxes containing marriage bands worn by her father and his wife, now deceased.

Griffis, 48, said she has been frantically calling her father and brother from Georgia on Thursday to urge them to seek shelter in a neighbor’s home that has a basement.

“By the time they answered, it was on them,” Griffis said.

For three hours, the fire department cut through debris to reach the injured men in the field when suddenly winds started swirling again, possibly from a nearby tornado.

The fire department grabbed the men and fled to the nearby home’s basement, seeking refuge until they could safely transport the injured to a local hospital, Griffis said.

It’ll take time for these communities to heal and they can use all the prayers they can muster.