Donald Trump Jr. Triggers Joy Behar and Whoopi Goldberg on ‘The View’ by Bringing Up Their Past 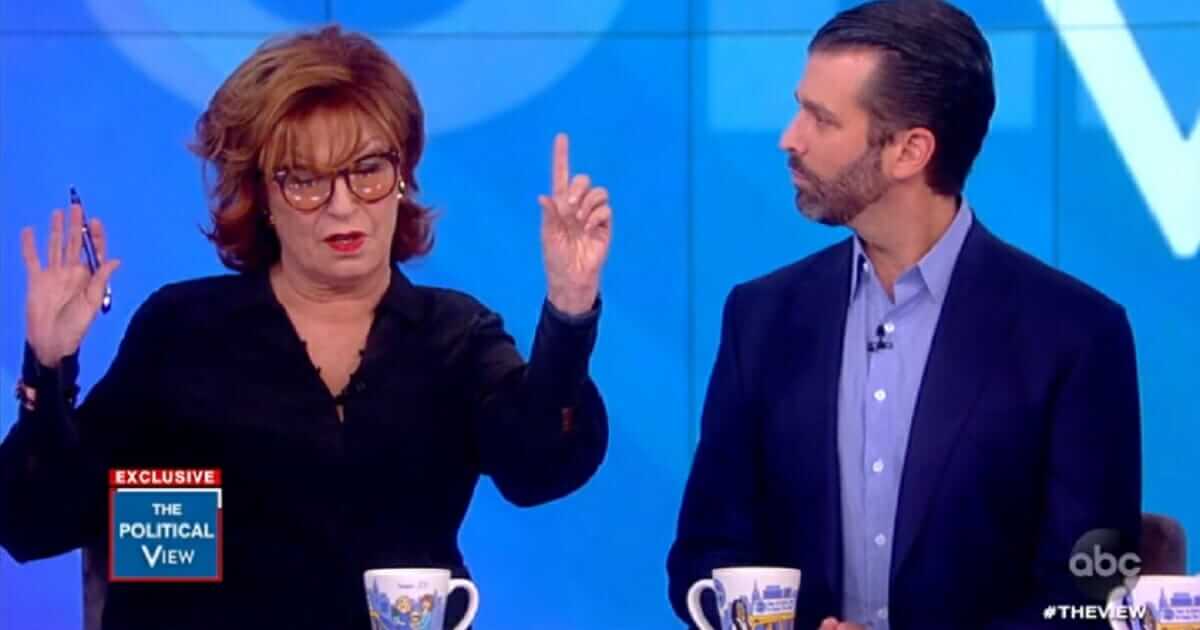 Was it a bald-faced lie? Or just a blackface one?

Either way, Donald Trump Jr. caught the harpies on “The View” in a weak spot Nov. 7 during a heated discussion on ABC’s talk show for shrill liberals. He defended his father, President Donald Trump, by bringing up some of “The View” co-hosts’ own more embarrassing moments in public.

And Joy Behar, the shrillest of the shrill, got the worst of it.

Appearing on the show while promoting his new book, “Triggered: How the Left Thrives on Hate and Wants to Silence Us,” Trump Jr. was assailed from all sides by a group of women who promotes public dislike of President Trump on a daily basis.

But he gave back as good as he got.

At one point, Behar and co-host Whoopi Goldberg brought up past statements by the elder Trump, such as the 2015 speech where he announced his candidacy with allusions to Mexican “rapists,” or the now-infamous “Access Hollywood” tapes made in 2005 (where Trump talked about grabbing women by their genitals).

Don Jr. responded: “We’ve all done things that we regret. … Joy, you’ve worn blackface. Whoopi, you said that Roman Polanski … ‘It wasn’t rape-rape,’ when he raped a child. So let’s talk about serious things.”

It was a moment that lived up to the “Triggered” in Trump Jr.’s book title.

Check out that part of Trump Jr.’s appearance on “The View” here:

When Behar denied she’d ever worn blackface, Goldberg, the clown show’s ringmaster, backed her up — and played the race card while doing it.

“She was not in blackface,” Goldberg said. “Being black, I recognize blackface. This I can say, OK? I know it when I see it.”

At the commercial break, according to Fox News, Trump Jr.’s took to Twitter to show that both women were  …  shading the truth, at least as far as Behar’s makeup was concerned.

Here’s @TheView‘s Joy Behar admitting on national TV that she in fact wore blackface. Why are they denying it now? https://t.co/B9ReOYrwXY

It’s interesting to note that Goldberg didn’t try to defend her own comments regarding the notorious movie director Roman Polanski, who is still a fugitive from justice in the United States owing to his 1977 guilty plea to having unlawful sexual intercourse with a 13-year-old girl.

That might be “rape,” to most people. It’s not “rape-rape” to Goldberg, though.

But both Behar and Goldberg had no problem sitting on national television denying something that is already widely known.

Liberals might quibble that Behar’s makeup wasn’t, strictly speaking, “black.” But she herself admitted that it “was a little bit darker than my skin.”

And there’s no denying that the hair in Behar’s picture is an afro — considerably more “black” than she normally wears on the show.

In short, it’s blackface, and the only reason Goldberg defended it is because Behar’s politics should make her immune to accusations of “racism.”

It doesn’t fit the narrative. It ONLY matters if they’re Republican

It’s not black enough for some folks to consider it true blackface. But it would be if Joy was a Republican.

Great job on calling her out! She got so flustered whoppy had to intervene 🤣🤣🤣

There’s no question that if Behar had been anything other than what she is — a vocal liberal with a well-known penchant for criticizing the Trump administration at every opportunity — that costume would have been considered “blackface” as much as anything worn by Virginia Gov. Ralph Northan during his days at Eastern Virginia Medical School.

Behar got a pass because she’s a liberal. Just like Northam is still in office because he’s a Democrat.

But fortunately, Donald Trump Jr. wasn’t going to back down from calling out a bald-faced lie — or at least a blackface one.