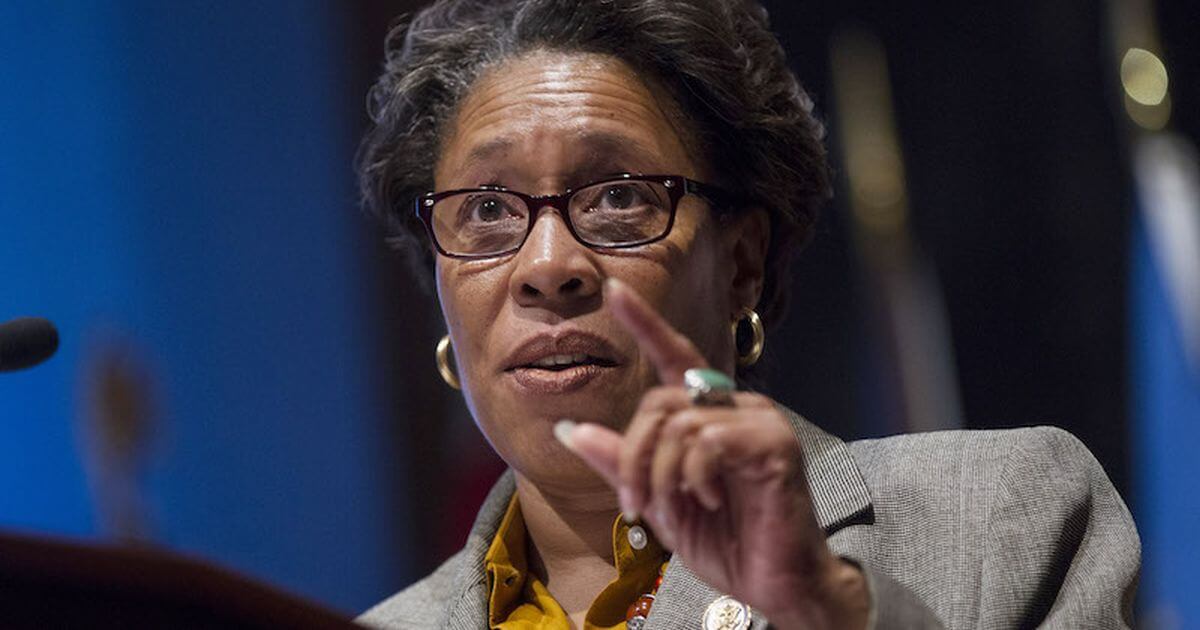 One of President Joe Biden’s Cabinet members is accused of violating federal law last week while touting Democrats who could run for the Senate next year, according to a complaint from Americans for Public Trust, a nonprofit “dedicated to restoring trust in government by holding politicians and political groups accountable for corrupt and unethical behavior.”

The 1939 Hatch Act bans most partisan political activities by government officials while acting in their official capacity.

On Thursday, Housing and Urban Development Secretary Marcia Fudge, a former congresswoman from Ohio, appeared at a White House news briefing to discuss the Democrats’ COVID-19 relief bill. While she was there, she answered a question about the Democratic Party’s chance to win a 2022 Senate race in Ohio.

“Given the highly partisan nature of the American Relief Bill, this was an opportunity for Secretary Fudge to demonstrate to the American people that all individuals are respected, regardless of political leanings,” Caitlin Sutherland, executive director of Americans for Public Trust, said in the letter to Henry Kerner, special counsel in the U.S. Office of Special Counsel.

“Instead, Secretary Fudge used her first public appearance to express support for her political party’s chances in an upcoming Senate race,” Sutherland said.

“The American people are entitled to trust in their government, knowing that political opining has no place during the performance of official business duties,” she wrote. “Therefore, we respectfully urge OSC to investigate this matter and any potential violations of the Hatch Act and standards of government employees.”

According to a White House transcript of her appearance, Fudge was first asked to discuss who might take her place in Congress but passed on any comments about that race.

“How about the Senate race in your state?” a reporter asked.

“Is there a Democrat that should run?” the reporter persisted.

“Oh, absolutely,” replied Fudge, who was then asked to identify the Democrats she thought should enter the race.

“If there is a government employee speaking from the White House briefing room and is there in their official capacity, then they’re prohibited from engaging in political activity while they’re speaking,” an official from the Office of Special Counsel said, according to The Post, which did not name the official.

“Under the Hatch Act, if you are giving an official policy talk at the White House, you cannot talk about the prospects for the Democratic Party or Republican Party in an Ohio Senate race,” he told The Post. “It’s completely inappropriate and would violate the Hatch Act.”

Noah Bookbinder, president of Citizens for Responsibility and Ethics in Washington, also said the comment was troubling.

“That’s the kind of thing that administration officials should be very careful about. Our strong preference and the right thing to do is to avoid it entirely,” he said, according to The Post. “It is entering a dangerous territory when an official starts talking about a specific race and about which party can win and about their own party.”

The publicity prompted a statement from Fudge.

“When I was discussing getting relief to the American People and the American Rescue Plan from the briefing room on Thursday, I answered a question from a reporter related to Ohio politics,” she said in a statement Friday, according to The Post.

“I acknowledge that I should have stuck with my first instinct and not answered the question. I take these things seriously and I want to assure the American people that I am focused on meeting the needs of our country.”

The letter from Americans for Public Trust noted that while in Congress last August, Fudge spoke about the Hatch Act, saying, “Government officials in appointed, cabinet-level positions … should know better than to abuse their official capacity at the expense of American taxpayers.”

But Sutherland said she did not meet her own standards.

“Given that Secretary Fudge has overtly criticized past cabinet secretaries for violating the Hatch Act, it is clear that her own conduct falls short of her own standards for compliance with the law,” she wrote.

“Federal employees must uphold the Constitution and the laws of the United States, including laws prohibiting political conduct during official activity,” Sutherland wrote.

“Secretary Fudge is not only restricted from political activity in her official capacity, but there are restrictions from political activity occurring in federal buildings,” the letter said. “In her official capacity in a federal building, the White House press room, Secretary Fudge openly discussed and expressly advocated for a Democrat victory in the upcoming Ohio Senate race. This behavior falls squarely within the prohibited activity of the Hatch Act.”

Sutherland wrote that Fudge’s letter admitting she did the wrong thing “highlights that her discussion of the Senate race violated the Hatch Act, and the appearance of impartiality was destroyed by her original comments.”

“It is not only reasonable for the American people to expect that government employees avoid intermingling political activities and official duties, but it is required,” the letter said. “Taxpayers should also have every expectation that public servants solely focus on official duties on tax funded time.

WATCH: Blumenthal argues Republicans "complicit in all these shootings"

WATCH: Biden puts Harris in charge of Migrant surge, says "I can think of nobody who is better qualified to do this"