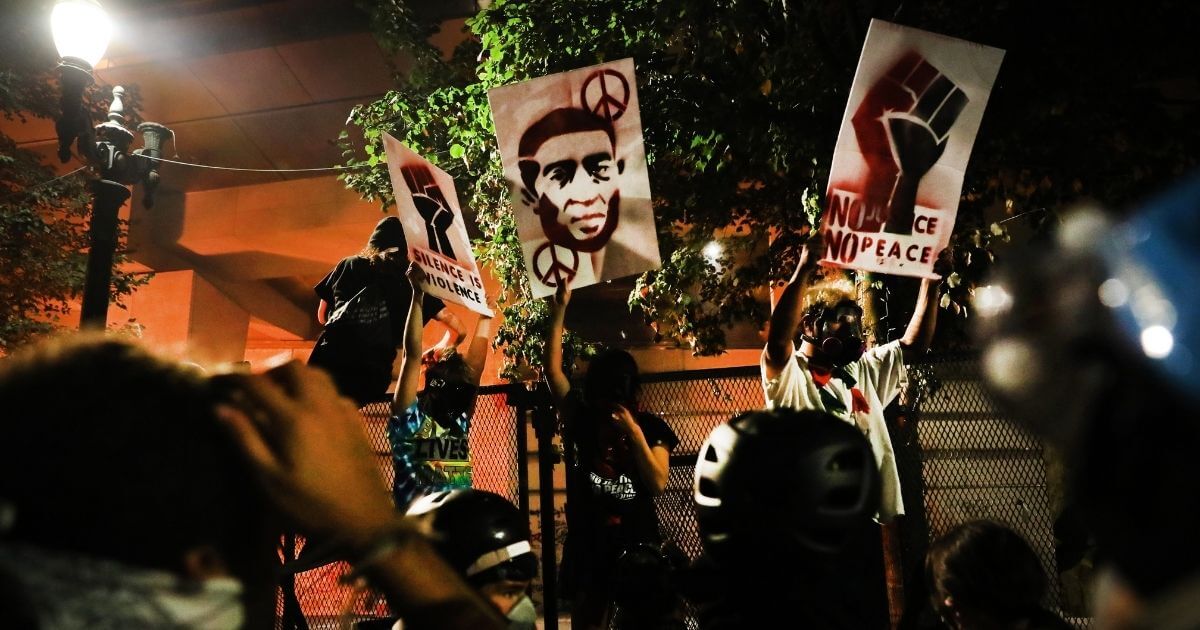 Derek Chauvin was by no means a sympathetic figure, but he still had every right to a fair trial.

However, a report from The Post Millenial Sunday revealed that at least one of the jurors who convicted the former Minneapolis police officer for the murder of George Floyd may have come to the jury pool armed with an agenda and possibly an assumption of guilt.

Brandon Mitchell, previously only known as Juror #52, denied having relevant knowledge of Floyd’s civil case during jury selection in March.

But a social media post recently unearthed from seven months earlier showed him wearing a “Black Lives Matter” hat and a t-shirt emblazoned with the message “Get your knee off our necks” — a reference to the manner of Floyd’s death — and “BLM.”

“Here is Juror #52 who said he was impartial during jury questioning,” commentator Jack Posobiec tweeted with a screenshot of the Facebook post that is now either private or unavailable. “Also runs a podcast,” he added referring to Mitchell’s “The Wholesome Podcast” on Spotify.

Here is Juror #52 who said he was impartial during jury questioning. Also runs a podcast. https://t.co/JaYM8RTwDj pic.twitter.com/LpmZ8bmD9L

Paul Blume of KMSP-TV was live-tweeting the jury selection process and described how Mitchell made it through voir dire.

“Judge Cahill asked Juror #52, whether he heard anything about the #GeorgeFloyd civil case,” Blume wrote March 15.

“He says, no. He explained hearing some basic info about trial dates, etc from the news in recent months, but nothing that would keep him from serving as impartial juror,” he said.

“Juror #52 wrote in his jury questionnaire that he wondered why other police officers at the scene did not intervene in #GeorgeFloyd deadly arrest,” the thread continued.

“He recognizes the historic nature of the case. Defense says he is an acceptable juror. So state’s turn to question,” Blume said.

Juror #52 wrote in his jury questionnaire that he wondered why other police officers at the scene did not intervene in #GeorgeFloyd deadly arrest. He recognizes the historic nature of the case. Defense says he is an acceptable juror. So state’s turn to question. #DerekChauvinTral

Mitchell has spoken since the trial about serving as a juror as a way to “spark some change” and talked about not watching the Floyd video in its entirety beforehand because he didn’t want to see “a black man being killed” — sentiments that hardly convey impartiality.

In an interview on the podcast “Get Up! Mornings with Erica Campbell” Tuesday, Mitchell explained the process of being chosen for the jury.

Mitchell thought he was picked because he seemed “even-tempered” and carefully answered questions so he “didn’t seem too biased either way.”

The host asked him why he didn’t have much knowledge of the incident before the trial, and his answer hints at his possible foregone conclusion.

“I had seen like a little portion of the video but I couldn’t really watch the video right there because it wasn’t something I wanted to see so much of — a black man being killed,” he said.

“I can’t watch it,” he told the host of his reluctance to watch the clip of Chauvin and Floyd’s interaction.

That phrasing he used is key because the conviction meant Chauvin was directly responsible for Floyd’s death, rather than the possibility he passed away from another cause — did he simply stick with his first impression?

“I didn’t need to know much else, though,” Mitchell clarified later. “I knew how the video would end.”

He also said the jury “deliberated total for like four or five hours where we were just going back and forth, and I felt it should have been 20 minutes.”

The most definitive statement came later, however, when spoke about how he viewed his role as a juror in the first place.

Mitchell is just the first of the twelve to speak out so far, but his statements already compound worries that Chauvin did not receive the fair trial he was entitled to under the law.

California Democratic Rep. Maxine Waters had gone to Minnesota seemingly to encourage unrest if the jury did not convict.

There were threats — both direct and simply understood — that cities like Minneapolis would burn again if Chauvin walked.

The deck was also stacked against Chauvin as he was denied a change of venue and forced to face a jury of people whose city was vandalized, burned and destroyed based on what people saw in the viral video clip.

Combined with Mitchell’s recent admissions, it’s hard to argue that Chauvin wasn’t condemned before he walked into that courtroom.

There’s no doubt Chauvin showed great callousness as he knelt Floyd’s neck for nine bone-chilling minutes rather than do something when the man lost consciousness.

However, the beautiful thing about the American justice system is that those accused of the most heinous crimes like murder, child molestation and even improper policing still get their shake at a fair trial.

If activists are so concerned about systemic problems in the legal system, they should be the first to make sure even Chauvin had has proper day in court — instead, it seems like they’re celebrating how easy it was to convict him before the first gavel fell in his trial.

California Wants to Create 'Safer' Prisons by Letting 63,000 Violent Felons Onto the Streets