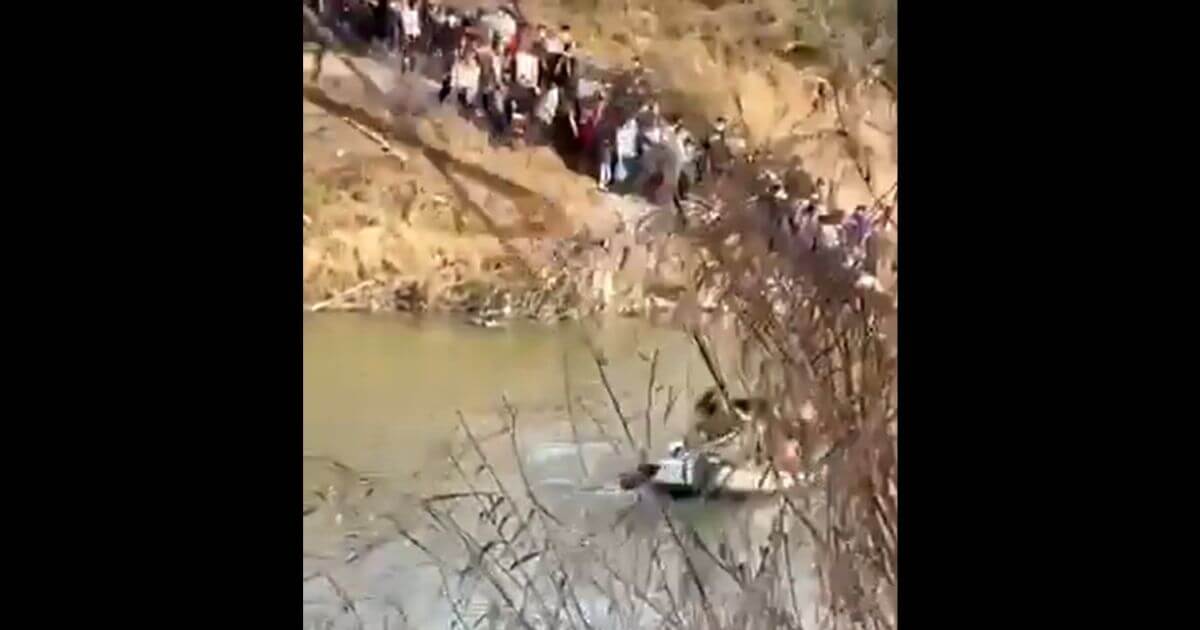 The United States is being barraged by migrant caravans on a daily basis while President Joe Biden refuses to even acknowledge the crisis he ignited with his irresponsible rhetoric and border policies, including an abrupt halt to wall construction.

In a shocking video, a long line of migrants is seen waiting for human smugglers to help them illegally enter the United States from Mexico using a raft to cross the Rio Grande River into South Texas.

Charlotte Cuthbertson, a senior reporter with The Epoch Times, said the video was filmed on Thursday morning.

Video taken in SE Texas this morning. Huge line of people waiting for smugglers to ferry them across the Rio Grande into the US. Video courtesy of Tripwires and Triggers. #BorderCrisis pic.twitter.com/KtONTzfP85

The senator, who visited the border this week, observed that illegal aliens are flooding the border by the thousands every day.

He warned that this influx will skyrocket to “hundreds of thousands by the summer” as the weather gets warmer and Biden continues to ignore the catastrophic humanitarian and economic debacle he unleashed.

“There are over 3700 children in border patrol jail-like facilities. How can you say that’s not a crisis?”

“It is a humanitarian crisis,” Graham said on Fox News “Hannity.” “It’s going to be an economic crisis for our cities along the border.”

Economist Peter Navarro, who was an aide to former President Donald Trump, predicted that a record 1 million illegal aliens will sneak across the U.S. southern border in 2021.

“That’s a fact. That will happen,” he said somberly last month on “War Room: Pandemic.”

Tragically, the surge at the border is mushrooming at the same time that millions of Americans are unemployed and struggling financially due to the mass coronavirus shutdowns of the past year.

Democrats screech that it’s racist and heartless to stem the influx of illegal aliens, even though the migrants themselves endanger their own lives by making the harrowing trek.

Consider this: If huge throngs of white people were barraging Mexico’s borders on a daily basis in defiance of the sovereign nation’s immigration laws, there’s no doubt the left would be shrieking incessantly about “white colonialism.”

In May 2019, Trump proposed a merit-based immigration plan that prioritizes high-skilled workers and would require immigrants to pass a civics test before entering the country.

Canada, Japan, New Zealand, Australia and the United Kingdom all have merit-based immigration systems. No one is calling them racist for wanting to select the cream of the crop to enter their countries.

Trump’s speech from the White House Rose Garden outlining his proposal has been deleted from the official White House website.

Hypocritically, Mexico has very a strict immigration policy — stricter than the United States.

Mexico only welcomes foreigners who will be useful to, and contribute to, Mexican society, according to the immigration provisions of the Mexican Constitution:

Predictably, shortly after Trump proposed his merit-based immigration plan, he was viciously attacked by race-hustling Democrats.

One such attack backfired on Democratic Rep. Ilhan Omar of Minnesota, a refugee who was rescued by a Christian church in America.

Omar tweeted in May 2019: “A ‘merit-based’ immigration policy is fueled by racism towards the Latinx community. Our immigration policies shouldn’t be based on discrimination, fear, or bigotry.”

In her condescending tweet, Omar suggested that Latinos were too stupid and unskilled to qualify for merit-based admission. She later deleted her tweet following a heavy backlash.

However, before she did, Republican Sen. Ted Cruz of Texas — whose father is a legal Cuban immigrant — torpedoed Omar for her bigotry of low expectations for Hispanics.

“As the son of a Cuban immigrant whose Dad came to get a math degree and become a computer programmer, I’m troubled that Dems seem to believe Hispanic immigrants can’t qualify for skills-based legal immigration,” Cruz tweeted.

“Bringing in more scientists, engineers and doctors is good for US jobs.”

As the son of a Cuban immigrant whose Dad came to get a math degree & become a computer programmer, I’m troubled that Dems seem to believe Hispanic immigrants can’t qualify for skills-based legal immigration. Bringing in more scientists, engineers & doctors is good for US jobs. https://t.co/iugniZgJtL

Cruz is an accomplished attorney who graduated from Princeton and Harvard Law School.

In contrast, the Somali-born Omar was an unskilled, uneducated refugee whom the United States rescued from a Kenyan refugee camp.

Between the two, it’s obvious that Cruz would have made the cut under a merit-based system, while Omar would not have. So it’s no surprise that those who wouldn’t make the cut would complain the loudest.

'I Did Not Do What Has Been Alleged. Period'

Gov. Cuomo Has 'Lost The Confidence Of The People', Says He 'Must Resign'