BLM Protesters Shut Down Grocery Store, Accuse It of ‘White Supremacy’ for Using Cops as Security 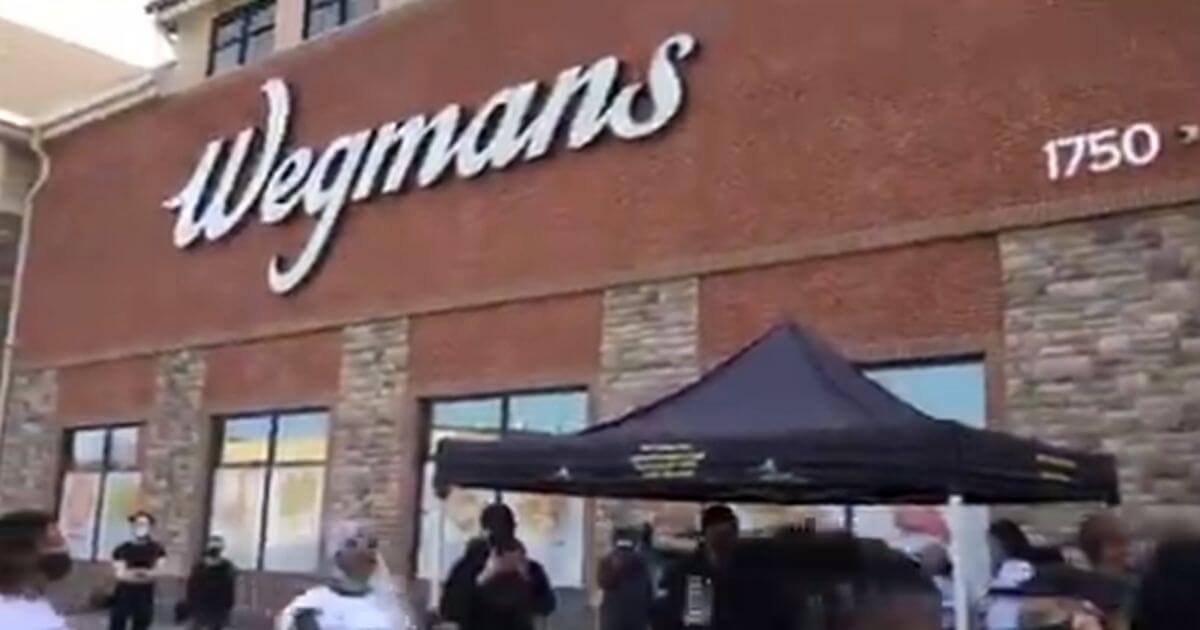 A Black Lives Matter protest over a 2020 police incident in Rochester, New York, targeted a store that had nothing to do with the case.

Tuesday marked the one-year anniversary of the encounter between Rochester police and Daniel Prude, a 41-year-old black man, who was stopped by police while naked and high. Bodycam footage showed he was placed in a restraint hold by the officers who detained him and became unresponsive shortly afterward. He died one week later in a case the Monroe County Medical Examiner called a homicide, according to WHAM-TV.

Hundreds of protesters gathered at Parcel 5 in Rochester before marching to Wegmans, a grocery chain, where they took over the parking lot, leading the store to close.

Along the way, they briefly shut down a bus terminal.

The parking lot takeover featured music and dancing as protesters sought to explain their cause to anyone passing by.

lol that they locked the doors to the bus station and wegmans as if a crowd of 100-some people remembering a man the police killed are going to… what, exactly? get on a bus? take the protest through the baking aisle? https://t.co/CKDr0Tlpkn

EAST AVE WEGMANS: I’m seeing frustrated customers inside trying to get to home with groceries. Store remains closed down as more than 100 have shut it down pic.twitter.com/YmEbJcbPB3

“Wegmans is a system that upholds white supremacy,” said Ashley Gantt of Free the People Rochester group, which organized the protest.

She said that was illustrated by the store’s use of uniformed Rochester police for security purposes, according to the Democrat & Chronicle.

The store on the outskirts of Rochester was targeted so as not to “preach to the choir,” Gantt said.

“As we march, rally and protest — you have to be able to stop commerce,” said Anthony Hall, a Rochester native who is running for City Council, according to the Democrat & Chronicle.

“Wegmans is a large business in Monroe County. This is the only Wegmans in the city limits, but it’s not accessible to the city residents. Hopefully, Danny Wegman talks with the Mayor and City Council because this affected him today,” he said. “We want people to be inconvenienced because Daniel Prude’s family has suffered a great loss.”

“Wegmans exemplifies what’s wrong in our community,” said Justin Morris, president of the Rochester Chapter of the Arc of Justice.

“Wegmans started in the inner-city, in some of our most vulnerable communities, then they got their check and left,” Morris said. “There is no reason why Danny Wegman is having so much success, but in the city, we have food deserts.”

Morris demanded the chain open stores in areas where it once had them.

“Put your stores back in urban communities,” he said. “Commit to bringing something nutritious into the community that isn’t supplied by Foodlink or some secondary food supply.”

Wegmans issued a statement on shutting down the store during the protest.

“Our East Ave. store is currently closed due to protest activity taking place outside of the store. At this time, no customers remain in the store, and the doors will remain closed. Our number one priority is the safety of our employees and customers,” the statement said.